In light of yesterday's election, I wanted to dust off this blog to officially toss my hat into the ring for the presidential race of 2020.

That's right: Trump's nomination has proven that you don't need any of the following to be President of the United States of America:
I CAN DO THIS. I AM THE ONLY ONE WHO CAN DO THIS. YOU ARE ALL FUCKING DOOMED IF YOU DON'T VOTE FOR ME: AMERICA WILL BE REDUCED TO ASHES BY MUSLIM EXTREMISTS WHO HATE CHRISTIANS AND LOVE ABORTIONS, GAY MARRIAGE, AND SOCIALIZED HEALTHCARE.

I KNOW IT. YOU KNOW IT. EVERYBODY KNOWS IT.

*That's me just telling it like it is, which you love because you're all fucking sheep.
**Why be mean? Fuck you, that's why: "I could stand in the middle of 5th Avenue and shoot somebody and I wouldn't lose voters." (not my quote, but is apparently totally cool)
***Since Twitter is our weapon of choice, take note of the hashtags below for posterity.

If any of these things are music to your ears, please pledge your allegiance to the Mike Maples 2020 campaign (GoFundMe coming soon!) 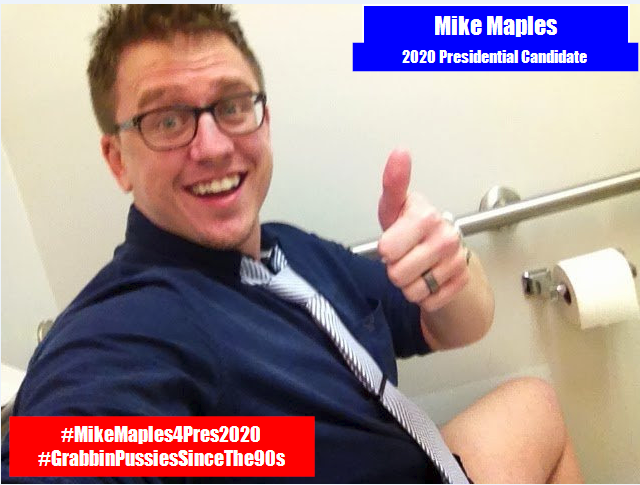